Named a Comic To Watch by Comedy Central, Daniel Van Kirk is a comedian that you might know from Bob’s Burgers, Comedy Central, and the NFL Network. You can also hear him every week co-hosting podcasts, “Dumb People Town” with the Sklar Brothers and “Pen Pals” along with Rory Scovel! Daniel tours around the country performing at comedy clubs and at festivals including Just For Laughs Montreal, SF Sketchfest, The Moontowner Comedy Festival, and more. His album “Thanks Diane,” which debuted at #1 on iTunes, is available wherever you listen to comedy.

With over 1 million downloads a month, these podcasts have garnered Daniel a nationwide audience. Both of these very successful podcasts have extremely loyal fan bases and listeners of the show always grab tickets and come to shows when Daniel is performing in their area.

Alongside Daniel Van Kirk will be comedians Andrew Youngblood and Salem’s own Jared Richard. Plus special guests!

Doors open and seating begins at 7:30 PM. Tickets cost $20 through Eventbrite or $25 on the day of the show at the door. (So get those tickets ahead of time!) The show is located at 980 Chemawa Rd NE, Keizer, OR 97303. The Willamette Valley Comedy Club is an independent enterprise producing shows within the space.

Tickets at https://dvkinsalemkeizer.eventbrite.com or at the ticket link box located at the top of this article.

***All sales are final. If the show is canceled, tickets will be refunded.***

Everyone’s favorite open mic is back for September! This month, it’s “Show Up, Sign Up, Go Up!”.  Meaning, just show up to the Willamette Valley Comedy Club at Keizer Homegrown Theatre at 7:30 pm when the doors open and to get your name on the list. The list will be posted right before the start of the show and tonight’s host, Jared Richard, will be kicking things off and then running through the comics! This evening’s closer/feature will be the incomparable Drew Wilson-McGrath!

Tickets at the door cost $5, or, if you register for tickets 24-hours in advance, they’re free! So plan ahead for our next open mic on Sept 17th, also here in Keizer.

Check out the newest comedy open mic in the Salem/Keizer’s area! And this is PNW Comedy’s first event with our new branding: The Willamette Valley Comedy Club @ KHT. First Fridays are here all summer long, so take a peek at the first one on June 4th. If you’d like on the mic that just happens to be in a really cool spot for comedy, email info@pnwcomedy.com stating that you’re interested in performing by 9 am on 6/4. The sooner you email, the 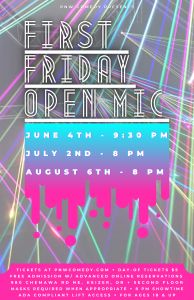 more likely you are to grab a spot (we’re already filling up for this month!). Set times are dependant on the total number of people that sign up and show up.

A small number of walk-up spots will be available for every open mic this summer. These day-of spots are available for sign-ups starting 30 minutes before the show.

Attending the First Friday Open Mic is free with advance online reservation, though, if you have a good time or what to support us putting on more open mics like this, we do have a Pay What You’d Like/tip jar available. And for those that are more into spur-of-the-moment activities, day-of walk-up General Admission tickets cost just $5 at the door. There is no cost for comedians/performers to attend, though they are encouraged to send a message to info@pnwcomedy.com to let the producer(s) and host know to save a spot in the theater for them.

The June 4th start time is at 9:30 PM, with the doors opening and seating beginning at 9 PM. Concessions consisting of water and a small variety of candy will be available for purchase. Some content may not be suitable for everyone, so this event is for those aged 18 and up.