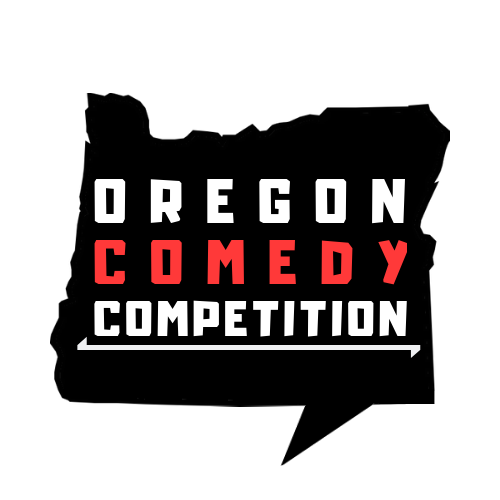 –The Audience Decides Who Wins!–

Are you funny? Pretty good at stand-up? Do you have what it takes to be crowned the Oregon Comedy Competition champion? One good set in one of three First Rounds is all it takes to make it to The Finals for your chance at $500 and stand-up stardom!

What is the OCC? The Oregon Comedy Competition consists of four comedy shows that take place in three different cities across the state of Oregon in August and September of 2019. What’s special about the OCC? Well, the winner isn’t decided by a bunch of comedy good ol’ boys- at the conclusion of each show, the audience votes for who they think was the evening’s best comic and the audience ultimately decides who is crowned the 2019 Oregon Comedy Competition Champion! And the best part? The winner gets $500 cash and future headliner or feature booking at PNW Comedy event(s)!

Any level of comedian FROM ANYWHERE may submit to compete– From the novice comic that has only done a few open mics all the way up to the touring headliner that has been on stage for years and years.  (The show isn’t designed for traveling features/headliners, but we’ll gladly consider them if they’re interested in participating). The comics chosen to participate will be notified no later than June 30th, 2019.

Comedians wanting to compete must be able to get to the venue the night they are scheduled to perform. (Either Aug 2nd in Forest Grove, OR, Aug 17th in Bend, OR or Sept 7th in McMinnville, OR and if you make it to The Finals, Sept 27th, 2019. No exceptions.) If you are selected to move on to the next round but cannot attend the next show date, you will be disqualified.

To be considered to participate in the competition, please email the following to OCC@PNWcomedy.com:

– Your name and/or stage name
– Where you are from/your home base and how long you’ve been doing comedy
– A picture and/or a headshot
– Any stand-up comedy related credits (shows, tours, TV appearances, bars mics, etc.)
– A comedy bio*
– Which two (2) Round One heat work best for you to compete?  Aug 2nd in Forest Grove, OR, Aug 17th in Bend, OR or Sept 7th in McMinnville, OR – LIST ONLY TWO
– A good quality video of you performing, which is ideally five-minutes. (No longer than 10 minutes.)*

At the conclusion of the voting, the ballots will be tallied up and the results announced live onstage directly after the show!

Summary: There will be four total shows that are separated into two different rounds- the First Round/Round One and The Finals. The first three shows will be included in Round One and have three separate heats on different nights in different cities (Forest Grove, McMinnville, & Bend, OR). The 2-3 comics that receive the most votes from each First Round heat will move on to The Finals and compete for a $500 cash prize on a third and final show!

First Round/Round One: 24+ competing comics (8-13 in each Round One Heat) will be assigned to compete in one of three heats. All First Round/Round One comics must do at least five minutes of material and no longer 7 minutes. Going over the maximum allotted time, or under the minimum time, may result in disqualification. (These performance times will vary by the venue due to runtime constraints and the number of comics performing.)

The Finals:  The 8-9 comics that advanced from the First Round/Round One heats will do 10-12 minutes each in the final round. (These performance times may change due to the number of comics in The Finals.) After the show, the audience votes for the comic they think did best and the comedian that receives the most votes wins the $500 cash prize! With second place getting $100.

– All potential competitor musts have done at least one comedy open mic.

– If a comic moves to the next round but is unable to make the next show, the next highest vote-getting comic in that round/heat will then take the that comic’s spot.

– Previous winners, booked headliners, and current PNW Comedy volunteers may not participate at competitors in the competition.

– Not following any of the rules listed above, or stated before, during or after a comedy show, may be grounds for immediate disqualification.

– The earlier you send in your materials, the better- Some comics may be accepted to participate in the comp for scheduling and other purposes before the submission end date of June 20th.

Q: Does it cost to submit to the Oregon Comedy Competition?

Q: What’s the point of doing this start-up, no-name competition?

A: Well, if you make it to The Finals and are voted the night’s best comic by the audience, you’ll receive $500 the night of the finals and you’ll be booked again as a headliner or feature at one of PNW Comedy regular show. You’ll also be invited back for the next year’s OCC to participate as the Host, MC or Feature.

Q: I competed in another PNW Comedy competition last year. Any chance I could compete again?

A: Yes! All previous participants are eligible (and encouraged!) to compete again. The only people that cannot compete are previous winners, currently booked headliners and PNW Comedy staff/volunteers.

If you have any more questions, comments or concerns, please feel free to email us at OCC@pnwcomedy.com.