Laugh with Gabriel Rutledge (Comedy Central, Nickelodeon, FOX) when he comes to Social Goods in Newberg, OR on Friday, Jan 27th!

Gabriel Rutledge is a renowned comedian that has performed his comedy at clubs and theaters across the United States and around the globe. Featured on Comedy Central’s Live At The Gotham, FOX’s show Laughs, Nickelodeon/Nick Jr’s NickMom Night Out, and viewed millions of times on TikTok, Rutledge brings his own hilarious blend of dad-humor and relatable takes to one of the best restaurants in Oregon’s wine country!

Doors open and seating begins at 7 PM. Showtime starts promptly at 8 PM. Tickets cost $15 through Eventbrite or they are $20 on the day of the show at the door. (So get those tickets ahead of time!) The show is located at Social Goods, 500 E 1st St, Newberg, OR 97132. PNW Comedy and the Willamette Valley Comedy Club are independent enterprises producing shows within the space.

If you do not follow the rules, you will be asked to leave immediately.

All sales are final. If the show is canceled, tickets will be refunded.

We’re going to be busy this weekend! First Friday Comedy at the Willamette Valley Comedy Club @ Keizer Homegrown Theatre (KHT) is back for July with two terrific events for the Salem/Keizer area!

We start Friday, July 1st off at 6 PM with our all-ages Intro To Improv in Salem/Keizer, OR class with instructor Tina Högström and get it really kicked off at 8 PM with our monthly comedy showcase.

Coming all the way from Bend, 4 Jesters & A Queen is a comedy showcase featuring an array of up-and-coming comics hosted by the Queen of the show, Deb Auchery. (All of this month’s free tickets have been grabbed, but Reserved Seating is still available!)

And then on Saturday, we have two different laugh opportunities for you! In downtown McMinnville at 3rd Street Pizza Company’s Moonlight Theater, Marc Yaffee will be delighting the masses with some top-notch comedy that has been seen on TV’s Showtime Network, Dry Bar Comedy, and PBS.

And for those looking for an excuse to visit the coast, PNW Comedy will be in Newport at Jack Sprats Bayfront with the hilarious duo of Amanda Arnold and Ryan Danley! Plus the very funny Dash Thompson. Headliner Amanda Arnold has had her stand-up comedy featured on the FOX TV show “Laughs” and Ryan Danley is an up-and-coming comedian and writer that has had his work featured on the comedy/satire site TheHardTimes.Net.

With two of the three First Rounds completed, The Western Oregon Comedy Competition will be coming to McMinnville on November 20th for the final First Round event of the WOCC! And this time the Willamette Valley Comedy Club will be at 3rd Street Pizza Company’s Moonlight Theater! 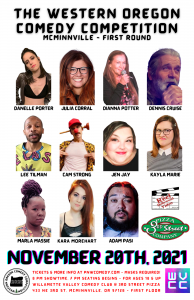 Tickets are cheap and cost only $10 online, or are just $15 the day of the show at the door. 3rd Street Pizza will be open, so delicious pizzas, salads, and alcoholic and non-alcoholic beverages will be available for purchase before and during the show. This event may feature material that is not suitable for everyone and is recommended for those aged 18 & up. **In accordance with local COVID-19 protocols, masks are to be worn at all times in the theater when not actively eating or drinking. No exceptions. And we ask that if you are sick at all to please stay home.**