The Willamette Valley Comedy Club is proud to be back in Sherwood at Langer’s Entertainment Center on Jan 20th at 8 PM with Jeremiah Coughlan!

Jeremiah Coughlan is a comedian. A comedian who physically resembles what would happen if Chris Farley ate Bob Ross. His stage presence embodies some of the same traits. He is an imperfect mix of chaos and control. In what can seem paradoxical, Jeremiah carries a calm and contented demeanor into his high energy and surprisingly athletic stage performances. Although he still hasn’t figured out how to complete a painting in 30-minutes.

With his candid, conversational brand of self-deprecating humor, Jeremiah has become a regular performer at clubs all over the Northwest, including Helium Comedy Club. He’s been featured on Audible’s comedy series “Sounds Like America”, has a notable podcast chronically the Portland Pickles baseball team called “Brine Time”, and has performed at venues and festivals all over the country.

Langer’s Entertainment Center is playing host to the Willamette Valley Comedy Club at their huge multifaceted arcade/bowling alley/bar/rock wall/laser tag venue on January 20th starting at 7 PM, which is when seating begins on the second level of Langer’s in The Tack Room.

Tickets cost $10 online or $15 the day of the show at the door. (So get those tickets ahead of time!) The show is located at 21650 SW Langer Farms Pkwy, Sherwood, OR 97140. The Willamette Valley Comedy Club is an independent enterprise producing shows within the space. The show starts at 8 pm, with seating beginning at 7 PM. And masks are required to be worn at all times when not actively eating or drinking, no exceptions.

Stand-up comedy returns once again to The Mac Club McMinnville on Saturday, Feb 17th for another terrific night of fun and laughs! 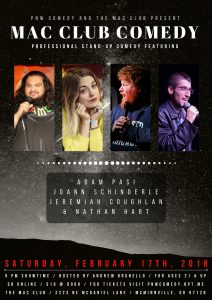 We’ll have Adam Pasi, Joann Schinderle, Jeremiah Coughlan and Nathan Hart showcasing their laughtastic skills the night of the 17th. Plus, after the show, we’ll be having our first comedy open mic of the year So start writing down your jokes and prepare for your time to shine onstage!