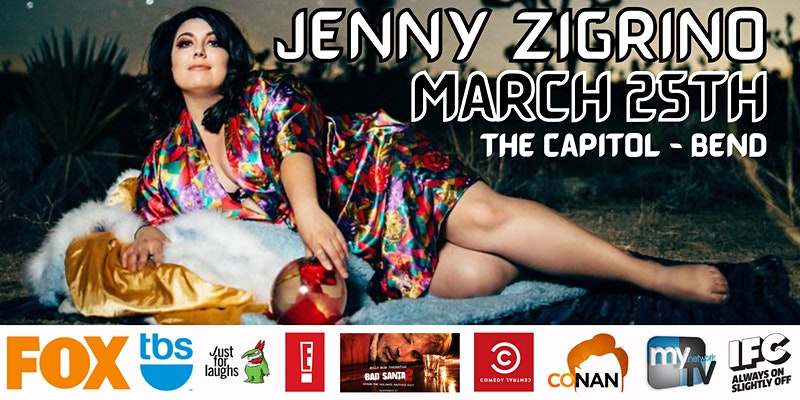 Get ready to laugh, Central Oregon! Jenny Zigrino (Comedy Central, Bad Santa 2, Conan) is bringing the funny to Bend on Friday, March 25th! She made her late-night standup debut on Conan O’Brien and keeps going back for a total of three appearances. She’s been a guest on the hit shows @Midnight, MTV’s Girl Code, and Adam Ruins Everything and featured on TBS, Oxygen, TruTV, Fox, and more. She created, wrote & starred in the Comedy Central Digital series Bad Ass Bitches of History showcasing badass babes through time.

A rising star in Hollywood, her first film appearance was a leading role in 50 Shades of Black with Marlon Wayans and went on to star opposite Billy Bob Thorton in Bad Santa 2. Her new film, Too Late, was slated to debut in 2021.

In addition to Jenny Zigrino, winner of Willamette Week’s Funniest Comedian, Bryan Bixby of Portland, and more will be opening up the show. Hosted by Bend’s own Eric Oren (107.7 The Beat, NBC).

Doors open and seating begins at 7 PM. Tickets cost $15 through Eventbrite or $25 on the day of the show at the door. (So get those tickets ahead of time!) The show is located at The Capitol,190 NW Oregon Ave, Bend, OR 97703. PNW Comedy is an independent enterprise producing shows within the space in association with Ipockolyptic Productions.

This show…
– – is meant for adults and might feature some content not suitable for everyone
– – will have indoor seating with A/C and Heating
– – asks that you silence your cell phone
– – is open to anyone aged 21 and up
– – might have lineup changes without notice
– – will not tolerate hecklers, interruptions, or those that do not follow the posted rules the night of the show

***If you do not follow the rules, you will be asked to leave immediately.***
***All sales are final. If the show is canceled, tickets will be refunded.***