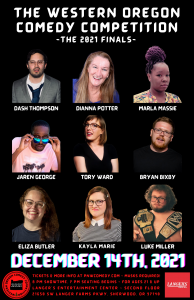 Competition on December 14th at Langer’s Entertainment Center in Sherwood! Thank you to everyone that was a part of this year’s showcases and to our great hosts, Drew Wilson-McGrath and Tony Meyer!
In The Final round, the nine comics that moved forward will each have 10 minutes to dazzle the crowd in Sherwood! Unlike the Moonlight Theater or Keizer Homegrown, Langer’s is definitely more of a bar show is for those aged 21 and up. While the room can seat well over 200+, seating is limited for this show. As always, at the end of the show, a vote will take place to determine who walks away with the title of the 2021 WOCC champ!
Ticket link: https://2021woccfinals.eventbrite.com
Facebook Event: https://www.facebook.com/events/4428982777228470/ or https://www.facebook.com/events/979842019604140/
-PNW Comedy