Look out, comedy fans! On Friday, January 25th, stand-up comedy makes it’s way back to Forest Grove! And this time, we have the hilarious Tyler Boeh!

Tyler’s been featured on TV (“Laughs” on FOX,) radio (his comedy album 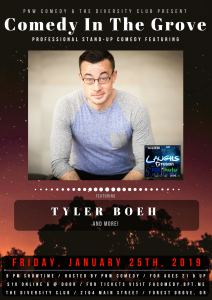 debuted at #2 on the Billboard Comedy Charts), has been written about in Forbes (https://bit.ly/2GPZCD1), has toured the country performing his comedy, and for one night only, Tyler will be visiting the Diversity Cafe to perform for YOU!